Did you catch our recent article on Buckrail? October is National Adopt a Shelter Pet Month and this article will give you the details on national animal shelter stats and tips on how to find the right pet for you.

You’re in the know if you follow us on Facebook and Instagram of what local shelter animals have stricken our fancy this month. But in case you aren’t a social media buff, here are a select few we thought you should meet. 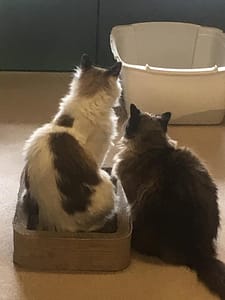 Harley and Muffy, the feline love birds of Meow Manner, at the Jackson/Teton County Animal Shelter. 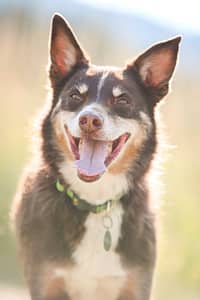 Sundance, the First Lady of the Animal Adoption Center’s Kitty City. She doesn’t believe in politics, she only believes in Catnip.

Dottie of the Animal Adoption Center has all of the supermodel dogs of the world beat in selecting functional fall frocks this year.

You need TVCAS’s Copper John. Why? Because ice cream tastes better when you’re sharing it with this guy.

TVCAS’s Blanche will keep you on your toes and full of youthful spirit like your favorite Golden Girl.

Interested in any of the above? Call their shelters listed in the descriptions.

Halloween is upon us, bring on the candy! With the holidays come an influx of enticing edibles that could be dangerous to dogs and cats. Here’s a quick recap of what to avoid:

One of our staff member’s fondest childhood Thanksgiving memories is walking into the dining room to find her Brittany Spaniel on top of the table gulping down a stick of butter. He survived but it was a long night of in and out. Fatty Foods like butter are not toxic but consumption can lead to vomiting, diarrhea and gas, and can result in pancreatitis and gastrointestinal issues.

Happy puppy now! But you’ll both be paying for it later!

The most commonly known food to keep away from your pet, why would we want to share anyway?

*If your pet is sneaky and gets into a holiday box of chocolate covered cherries take them to the vet immediately as cherries are very toxic to pets.

The same Spaniel that devoured the stick of butter also got fed way too much roasted turkey one year. He had his human father wrapped around his paw and he begged and got fed, which resulted in an after Thanksgiving emergency vet visit. A little plain turkey is ok, but not more than a couple of bites a day. Overdoing it and your dog will show symptoms common with any type of poisoning: lethargy, shortness of breath, and vomiting

All nuts aren’t the best thing for your pet to snack on with a high salt content, but Macadamia Nuts especially as they’re very toxic to pets.

Keep an extra eye on the charcuterie plate, grapes and raisins can cause kidney issues in dogs and cats. Even small amounts can result in lethargy, shivers and a decreased appetite. More extreme cases of grape poisoning can cause kidney failure. There isn’t an exact amount of these foods that must be ate in order to cause them to get sick, some react to just a few and others have a high tolerance. If they end up consuming grapes or raisins a trip to the vet is needed immediately.

We wish everyone a happy and healthy holiday season! Now seriously, bring on the candy!

Is it just us or has there been an influx of dogs going missing for extended periods of time? Check out these two success stories of missing dogs reuniting with their owners BECAUSE of community cooperation and effort!

Miss Maggie Rose went missing from her mom at the top of Snow King on September, 26th. She was spotted almost daily for the duration of her time on the loose. Little Maggie covered some MAJOR ground over the 16 days she was at large. She was spotted all over East Jackson, the Gregory Lane area, and on Snow King mountain. Jackson community members continued to call in sightings of Maggie Rose to her mom, Debbie and to the PAWS office daily. Everyone sang the same tune who saw her: she would bolt when you’d try and get close or say her name. PAWS staff went out looking for Maggie numerous times and often while out saw other people doing the same thing. Finally on the evening of Thursday, October 11th Maggie’s mom’s sports doctor, Dr. Josie (who knew Maggie was missing) was walking home on Glenwood and while on the look out for Maggie, Maggie crossed the street right in front of her and luckily into someone’s fenced in yard with the door open. Dr. Josie knew the homeowner who luckily was outside and yelled for her to shut the yard door and BOOM Maggie Rose was contained! The two women fed Maggie some food to keep her content, called her mom, Debbie, and alas the duo were reunited after 16 days separated.

Trissta and Maggie a few moments after Maggie ran into her yard.

Maggie’s first night home. Down 2lbs, exhausted, and happy to be home.

Maggie 5 days after being found. Groomed and 1lb heavier.

You may know long time Jackson resident and the Senior Center Bus Driver, Kathy. Kathy’s 10 year old rescue Red Heeler, Chase, escaped from the back of her truck in town on the morning of September, 25th. He too was seen many times all over town sticking to the North Glenwood and Stage Coach Motel area. Kathy received many calls from locals who were out and about and would see him, but Chase was in constant motion and never stopped running. On Sunday, October 14th a local couple were enjoying their last float of the season down the Snake River when they spotted Chase along side the river close to the Hoback Junction area! Chase didn’t run but continued to bark his head off asking for help in his own way. The couple pulled their boat over and Chase allowed them to get close enough to check his tag. They leashed him up, called Kathy, and walked him up to the road. Kathy and Chase were reunited after 19 nights! Chase is currently recovering from his time out on his own beautifully. He has a bit of a stomach bug, but other than that he’s back to his regular Chase self.

Jackson Hole community you are amazing! Because of your awareness for lost dogs, many days of looking, reporting of sightings, and quick actions, these pets are back with their people! Thank you to everyone who aided in reuniting these families!

First and foremost, THANK YOU to everyone who has been on the look out for the elusive Maggie Rose! It takes a village sometimes, and our Jackson village is really stepping up!

Maggie is still on the loose! She’s been at large since Thursday, Sept 26th evening. She has been spotted on top of Snow King, on Pine Drive, and most recently around the Hoback Sports and Wendy’s area and the intersection of Snow King Avenue and Jackson Street. Maggie Rose is a female Schnauzer who has flipped her little domesticated doggie switch and is now very skittish of people and the sound of her name.

How can YOU help? If you see Maggie please remain calm and move slowly. Toss her irresistible snacks: cheese, cold cuts, etc and see if she’ll come close. Try and lead her into a contained area such as a backyard, your house, a shop, or your car so you contain her and prevent her from escaping. She does LOVE dogs. If you have a friendly pup and you see her, have your dog go greet her and try and gain her trust. Once they’re together call your dog into a contained area, hopefully with Maggie will follow.

Spread the word. She’s been on the loose long enough!