On September 20th, 1999, a nonprofit animal welfare organization, called PAWS of Jackson Hole, was created. Founder Ann Smith, and a group of local Jacksonites, started a friend of the shelter organization that’s mission was to raise money to donate to the Jackson/Teton County Animal Shelter for the single purpose of spaying and neutering all of the shelter pets. At the time, the Animal Adoption Center and Lucky’s Place of Star Valley were not in operation yet, and the Teton Valley Humane Society in Driggs, Idaho (now Teton Valley Community Animal Shelter) was in the beginning years of operation. The J/TC Shelter was the only place on this side of Teton Pass for homeless animals. Ann became involved with a similar organization while spending time in Sedona, and saw the need in Jackson for a similar missioned organization. Back then, the town and county did not have a policy of altering animals at the shelter. Pets were adopted out unaltered, would reproduce, and the offspring would wind up at the shelter. It was an endless cycle and the shelter was perpetually overcrowded. 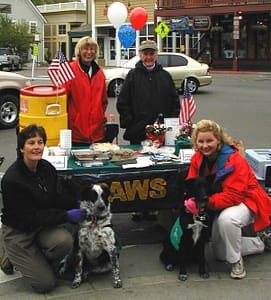 2006 Home for the Holidays Adoption Drive.

Model’s lining up to walk the runway at 2008 Fur Ball’s Furry Fashion Show.

Dogs being dogs at Sophie’s Place in the winter of 2011.

Since 1999, PAWS of Jackson Hole has had significant impact on the Greater Jackson communities. We’ve grown from a grass roots group to a professionally managed organization serving as a community resource to prevent pet homelessness, to protect pets from harm and suffering, to promote responsible ownership. We now have 4 full-time staff members who help pets and their people for their entire lives through 8 programs. PAWS’ staple staff member, Executive Director, Amy Moore states, “When I joined PAWS in 2006, there were regularly 40-50 dogs at the shelter and 60-70 cats. It was overwhelming just trying to get every dog walked each week. Over the years, with the help of PAWS’ Spay/Neuter program, The Shelter Fund and volunteer engagement we’ve seen a dramatic increase in adoption rates and a huge decline in the homeless pet population. Today the norm at the shelter is to have just 6 adoptable dogs and 8 cats. It’s been so incredible to watch the evolution of this shelter over the years and to be able to say that PAWS of Jackson Hole played a part in its success.” PAWS is still the J/TC Animal Shelter’s largest supporter, but over the years PAWS has expanded outside of being just a “friends of shelter” organization to one that supports the community owned pets (and their people) as well.

In 2008 PAWS launched our free spay/neuter program to Jackson/Teton County residents and extended the program into Teton Valley, Idaho and Star Valley, Wyoming in 2011. This program has been a game changer for the shelter numbers and stray population in our areas. Before spay/neuter support was offered, our MedFund program (formally McDoc) was developed. Muffie Beck, an avid animal lover and philanthropist, sadly passed away. In 2002, Muffie’s husband, Hank, approached PAWS to provide funding for emergency or unexpected veterinary care for pets of families experiencing financial hardship. MedFund has aided over 1,100 families since its inception. MedFund was extended to our sister communities in 2019 to continue saving lives. Outside of these three pillar programs, the other 5 continue to thrive and expand. In the animal welfare world, the environment is constantly changing and growing. PAWS’ mission is aligned to be part of the positive changes for pets and their people in our communities.

We invite you to celebrate our 20th anniversary with us at our Chamber Celebration on Tuesday, September 24th on the Cutty’s lawn from 5-7pm.