While October is a month that makes us giddy for doggie Halloween costumes and pumpkin spiced everything, it’s a month that brings awareness to a much darker topic. October was dubbed National Domestic Violence Awareness Month by the National Coalition Against Domestic Violence back in 1981. For many, home is a safe place of warmth and love for the whole family, including our pets, but for millions of others home is anything but a sanctuary. The U.S. Department of Justice estimates that 1.3 million women are victims of physical violence by a partner every year. According to the Huffington Post, there were 11,766 women who were murdered by their current or ex-male partners between the years of 2001-2012. To put this in perspective, during the same time, 6,488 U.S. Troops were killed in Iraq and Afghanistan.

The trauma of domestic abuse deeply affects humans and pets. Pets’ basic needs can be neglected during violent cycles of abuse. Pets are used as leverage by an abuser to force compliance and often pets become targets of violence themselves. Typically, the abuser’s goal is to have control over their victim’s life, and they often find the leverage in a victim’s beloved pet. “Between 18% and 48% of battered women delay leaving a dangerous situation out of concern for their pets’ safety,” warns the Animal Welfare Institute and over 50% of women do end up leaving their pets behind with their batterers. Not having a safe haven for the victim, their children, and their pets is a huge road block in a victim’s decision to get out. Today, very few domestic violence shelters in the U.S. allow pets.

Locally, the Community Safety Network is a fully pet-friendly campus. PAWS and CSN’s partnership program, SafePAWS, has been helping local victims and their pets since 2008. The original idea came from former PAWS Board Member, Maria Hayashida, “a friend of mine sought refuge at my house for a month with her dog since, at the time, CSN didn’t allow animals onsite. I think her experience made me stand up and act to formalize my idea of providing foster care for people’s animals.” In the early days of SafePAWS, PAWS staff and community members fostered the pets of victims. PAWS E.D. Amy Moore states, “When we started SafePAWS we only offered pet fostering. Due to the nature of the program there was very little advance notice when a pet needed shelter, so the vast majority of the pets ended up in my home. At one point I had a giant African Grey Parrot cage in my kitchen. By the end of the parrot’s stay, he had a whole new vocabulary! That’s when we knew it was time to build the SafePAWS shelter.”

Our partnership has evolved from fostering to having two pet dedicated sanctuaries on CSN’s campus. Coney’s Cottage, a fully functional on-site pet cottage was erected in 2010 and an additional safe haven for cats was constructed in the winter of 2019. Both options give pet families a place to be safely sheltered and cared for by their families. Often victims seek refuge and comfort from their pets during these times of stress, and keeping them together as a family is the best option for all. Outside of actual sheltering PAWS offers supplies, wellness exams, and any medical aid they need. Since 2008, SafePAWS has protected over 70 pets from domestic violence. Over the last two years SafePAWS is averaging 10 pets per year who are in need of our services. With aid from SafePAWS, CSN is the only domestic violence shelter in Wyoming that shelters the entire family. 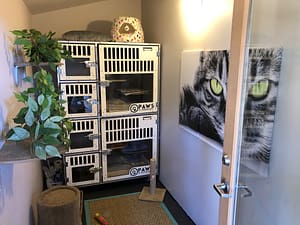 SafePAWS cat safe haven was completed in early 2019 with funding from the Community Foundation of Jackson Hole and by the Bowen family. 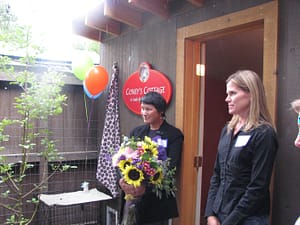 As October comes to an end, awareness about domestic violence should not. Knowledge is power and knowing the current environment for victims is essential in order to help them. If you’d like to get involved locally please call the Community Safety Network to learn about volunteer opportunities and/or visit our website: www.pawsofjh.org to donate directly to the SafePAWS program.

Watson moved to Jackson in 1999 to fulfill a lifelong dream of living out West. Over the past 20 years he has become a successful fundraiser, leader, and permanent fixture in the nonprofit community. Watson spent 15 years at Teton Science Schools and more than four years at Teton Raptor Center. He said he is very excited to bring his fundraising skills to PAWS and to combine his love for animals, people, and the community into his new role. Watson continues to volunteer for Boy Scouts of America (he is now in his 14th year doing so). He also coordinates the Blair Community Garden and is an accomplished artist. David and his wife Rhonda have two sons, a daughter, and a son-in-law, who all live in Jackson.

Michael Coles is a transformational leader, accomplished entrepreneur, author, education advocate, and motivational speaker. He co-founded the Great American Cookie Company and was Chairman, CEO and President of Caribou Coffee Company. In addition to boasting an extensive background in the business world, Coles is actively engaged on numerous corporate and nonprofit boards. He’s also passionate about pets and community.

Paul Mower’s caring for animals started at a young age dairy farming in the UK. He initially pursued a career in livestock husbandry with responsibility for quality assurance and animal welfare standards. A change of career path moved Mower into a role in private wealth management. Following time working at financial institutions in the Channel Island, Switzerland and New York, Mower eventually moved to Jackson Hole to set up and run a multi-family office. Paul, with his wife Amy, three children and dog Penny have called the valley home for the past three years.

We hope that you join us for our first-ever PAWSH party THIS SATURDAY from 6:30-11pm at Hatch Taqueria. Tickets are $25 per human (sorry, no pets) and include 2 specialty cocktails and a self-serve Taco Bar from 7-8pm. Tickets, silent auction, and pay to play booze bottle pull will benefit the PAWS organization.

(Click the ad below for more event info and a working list of the silent auction items.)

Chances are, you’ve been touched by one of our programs in one way or another. Be it a spay and neuter voucher,  MedFund, or the thousands of MuttMitts that we distribute throughout the valley, we are constantly making an impact on local pets and their people. Help us continue our mission by attending this swanking soiree!