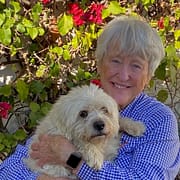 Ann is from Norfolk, Virginia, where she had numerous pets during her childhood. She moved to Jackson Hole in 1981 and has been in the real estate business since then. She has served on many local boards including Teton County Library, InterConnections 21, Dog is My Copilot, Wyoming Untrapped, and Teton Science Schools. Ann was one of five women who founded the Shoot‘Em With a Camera campaign to fight the delisting and hunting of grizzly bears. In 1999, she founded Paws of Jackson Hole as a Friends of the Jackson/Teton County Animal Shelter. 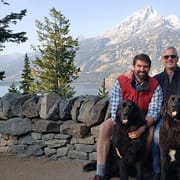 Klaus Baer has been involved with PAWS for 5+ years, and enjoys bringing to the table his decades of experience in leading the operation of Jackson based WRJ Design Associates, as well as his previous position of leading international graphic production teams at investment banks in New York.  Klaus is an avid animal-lover and continuously donates his time and talent to various non-profit organizations including, PAWS.  In his free time, Klaus enjoys exploring the mountains surrounding Jackson, gardening and making the occasional crème brûlée!

Andy Orr is an attorney whose litigation practice covers a broad range of issues from complex transactional and other commercial disputes to catastrophic personal injury and product liability cases.  He has represented clients in the energy, financial services, agriculture, healthcare, and technology spaces.  Andy has litigated cases in more than 20 states and tried cases to verdict in five of them.
After starting his career at Kirkland & Ellis in New York, Andy and his wife, an M&A lawyer, moved to Denver to be closer to the mountains while maintaining sophisticated law practices.  While in Denver they adopted a lab-hound mix named Buck.  They are now based in Jackson, where they recently welcomed a daughter.  Andy now practices at Holland & Hart.
Andy and his family support PAWS because they believe the wellness of Jackson’s pets is good for the entire community, and that promoting those objectives is an important public service.
Andy attended Colby College and Cornell Law School.