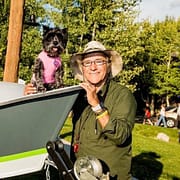 Michael Coles is a transformational leader, accomplished entrepreneur, author, education advocate, and motivational speaker. Michael co-founded the Great American Cookie Company and was Chairman, CEO and President of Caribou Coffee Company. He has been heavily involved in the business world and has been actively engaged on numerous corporate and nonprofit boards.  Along with these skills, Michael shares a strong passion for pets and community. Michael and his wife, Donna currently share their home with an 8-year-old miniature schnauzer named Journee… Although she is Donna’s dog, Michael wouldn’t trade her for anything. She is not a big barker but if you come to their door she turns into a Rottweiler. 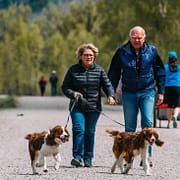 Paul Mower’s caring for animals started at a young age dairy farming in the UK, studying agriculture, he initially pursued a career in livestock husbandry with responsibility for quality assurance and animal welfare standards. A change of career path saw Paul move to a role in private wealth management. Following time working at financial institutions in the Channel Island, Switzerland and New York, Paul eventually moved to Jackson Hole to set up and run a multi-family office. Paul, with his wife Amy, three children and dog Penny have called the valley home for the past three years. Paul’s passion for helping animals follows his desire to give back to the community he loves.

Amy hails from Michigan and has called Jackson home for over 20 years. She and her husband Bob have a daughter and a menagerie of critters (3 dogs, a cat and six fish to be exact). She can be found running the trails with their chocolate lab Copper, coaching her daughter’s soccer team, and coddling their two geriatric dogs- rescue Pete the pug (complete with a tracheotomy & no teeth) & Hatch, a well fed-and loved black lab. Amy owns and operates Teton Tails and is celebrating 15+ years in business. She enjoys providing dog and cat owners the right foods and products to help improve their pet’s quality of life. An advocate of animal adoption and spay/neutering, Amy joined the PAWS board to give back to the animal

Rachel Kay Rogers is a new and active resident of Jackson, WY. Rachel has worked for the Mary Kay Foundation in Dallas, Texas doing fundraising, seminars, speaking, and grant selection since 2005. In 2014, Rachel joined the Board of Family Directors for the Golden Rule Family Foundation where she aids in grant proposing and selection. After moving to Jackson, Rachel expanded her work in non-profit by serving as a Director of St. John’s Health Foundation. She holds a Bachelor’s degree from Concordia University in Behavioral Science and continued her studies at Southern Methodist University’s Master Liberal Arts program focusing on human rights. Rachel is a full-time mom with two young sons who enjoys skiing and being outdoors.

She has always held a special place in her heart for pets & animals. Getting to be an advocate & voice for them is why she is excited to join PAWs and make a true difference. Rachel has a spunky Brussels Griffin named Elton who even has his own Instagram @SirEltonBrussel!

Cameron and her husband, Jon have been coming to Teton Valley for almost 10 years. They decided to make Jackson their full time home three years ago which coincided with a new addition, Ferdinand, a bernedoodle. Cameron has loved dogs for as long as she can remember and is excited to partner with PAWS.

Professionally, Cameron currently leads Client Success and Marketing for Airvet, a pet telemedicine company. Prior to Airvet, Cameron led the Strategic Client Group for Included Health. She has spent the majority of her career in client-facing roles partnering with clients on their marketing, engagement, and revenue driving strategies.

Originally from Maryland, Alex moved to Jackson with her English Bulldog, “Hollbear” in 2015 to start work as a small animal veterinarian at Spring Creek Animal Hospital. Since then she met her husband, expanded her furry family with a Hound Mix, ” Daisy” and yellow Lab “Butter” and will soon be adding a two-legged family member. She now lives in Victor and works at the 24-hour emergency hospital, WestVet in Idaho Falls. She still occasionally helps out the clinics locally both in Jackson and Teton Valley. From the moment she moved here, she experienced the incredible influence PAWS had on the community. It was a no brainer and honor to join the PAWS board. She is very excited about the recent acquisition of the shelter in Driggs and hopes to continue saving and enriching the lives of all animals in our local community and surrounding areas.

Professionally, Bettina Whyte is a nationally recognized leader in the financial and operational restructuring industry.  She has also served as an expert witness in many high-profile litigations and has served as a mediator of complex business matters.

Bettina first came to Jackson Hole on a visit when she was 18 years old and immediately fell in love with the town and the rugged beauty of the Tetons.  From that moment forward, it became her goal to someday live in the Valley.  She fulfilled that dream in 1996 when she bought her first piece of property and became a Wyoming resident.

In her desire to actively give to the Jackson community, she served as a Trustee of the National Museum of Wildlife Art for nine years.  But it is her passion for animals that led to her becoming one of the founding members of the Jackson Hole Police K-9 Auxiliary and to her active involvement with PAWS over the last several years.  She also remains active with several national animal organizations, including The Animal Medical Center in New York City and Canine Companions for Independence, which breeds, trains, and provides certified service dogs to individuals with special needs free of charge

So, when invited to join the board of PAWS, Bettina agreed with enthusiasm.   She is a strong believer that one of the best ways to help people is through animals, and this an underpinning of PAWS’ work in the Community.

She enjoys spending time playing with her two standard poodles, fly fishing, hiking, gardening and being with good company and friends.