In the world of animal welfare, you win some and you lose some. Back in July of 2019 PAWS was granted approval to start transferring pets into the Jackson/Teton County Animal Shelter’s from other regional shelters. Because of our spay/neuter program and our continued support of the J/TC Shelter, fewer pets are being surrendered to the shelter. PAWS’ role in the transfer program is to select, transport and sponsor the pets’ medical needs while in-shelter. The J/TC Shelter staff cares for the pets and facilitates the adoption process. Since the start of this effort we have transferred 48 pets in from Star Valley and Lander, WY, and Teton Valley and Idaho Falls, Idaho. Here are a few share-worthy success stories from the pets transferred in since July.

Gracie plus 6
In October of 2019 we got a call from some colleagues in a neighboring area who desperately needed our help. A new mama hound showed up to their property emaciated with signs of abuse. It was clear she had delivered puppies, and that she was living outside unfed. Our colleagues convinced her owner to surrender Gracie and her puppies over to them, and that’s when PAWS stepped in. Gracie needed medical assistance and time to overcome her injuries and her puppies needed forever homes. In November, we transported all the puppies into the J/TC Shelter, where they were made available for adoption. Gracie stayed back with her original rescuers to receive medical treatment, put on some weight, and take a breather from being a nursing malnourished mama. By Thanksgiving all of Gracie’s puppies had found their forever families. Gracie joined the J/TC Shelter in December and found her perfect family in February. 7 hounds whose fates were unknown are now adopted and thriving. WIN! 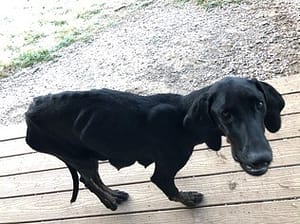 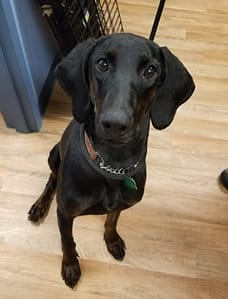 Trapped, Neutered, Adopted
PAWS amped up our effort in the Trap, Neuter, Return of feral cats in 2018. We had incredible volunteers who stepped up and wanted to get to work. Many of the ferals we trapped were successfully returned to their original property and are thriving as barn cats. Others were more friendly so we were able to socialize and adopt them into new homes. In total, this program has spayed/neutered/returned or adopted out over 200 cats. It’s been WILDLY successful!

TNR volunteer, Jean, and a bouquet of adoptable kittens.

Adoption Day for two kittens from our TNR program.

The Common Story
Some shelter pets have extreme stories (like Gracie), but most pets end up in shelters simply because their human has failed them. That was the case for Dougie, a dog who we transferred into the Jackson/Teton County Animal Shelter from Idaho Falls. When Dougie was found he had scars all over his face and was very skinny and scared. His life, so far, had been a tough one. During his 2-month stay at the Idaho Falls Shelter he was anxious and showed poorly. Due to overcrowding, he wasn’t getting enough exercise, enough socialization, and needed OUT! Dougie was transferred to Jackson in December, got the training, socialization, and hands on care he needed to calm down. We are thrilled to report he adopted by a fantastic human. Dougie can now be found wherever his dad is. He is his new forever shadow. WIN!

Our most recent transfers are 6 female puppies that were found by Lander Pet Connection, living underneath a porch, on the Wind River Reservation. The puppies are currently in foster care and have a couple more weeks of growing to do before they are ready for forever homes. With the recent closure of the Jackson/Teton County Animal Shelter due to the precautions necessary with COVID-19 it is uncertain when the puppies will be available for adoption. Please keep up to date with our social media platforms and Petfinder.com for up-to-date adoption information on these puppies.

5 of the 6 soon to be adoptable puppies.

COVID-19 and Pets
Scroll to top