You may have heard the promising news? On Tuesday, October 22nd animals became one step closer to having more legal protection than ever before. On that date, the U.S. House of Representatives unanimously passed a bill called the PACT Act, that makes animal cruelty a felony. The PACT Act which stands for Preventing Animal Cruelty and Torture, was introduced to the House by Florida congressmen Ted Deutch and Vern Buchanon and will revise a previous passed law, The Animal Crush Video Prohibition Act, which bans “crush” videos, passed in 2010. 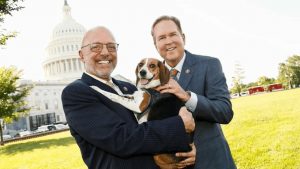 Currently, federal law only prohibits animal fighting, and only criminalizes violators when they create AND sell videos depicting the actual cruelty. There is one more loophole for the violators. The current law prohibits the creation and distribution of these horrific crush videos, but the underlying acts themselves are still legal under federal law. The PACT Act will amend the federal criminal code to prohibit the intentional acts of crushing, burning, drowning, suffocating, impaling or otherwise subjecting animals to serious bodily harm. This new bill essentially covers the intentional torture of animals, but not neglect, general welfare, or other issues.

The PACT Act allows authorities to go after the violators because they will have federal jurisdiction and will not be bound by state laws. If the bill becomes a law, there will be a federal anti-cruelty statute that would allow the FBI and other federal agencies to arrest and prosecute those who torture and kill innocent animals. Kitty Block, president and CEO of the Humane Society of the United States, states “This is a chance for our nation to end the most heinous forms of intentional animal cruelty. It is a historic moment in our country when we can come together to protect those who have no voice. We are so close to ushering in a law that would generate monumental shifts in how those who commit animal torture are prosecuted.”

What needs to happen now? Now we hope for President Trump to sign it.

Paws crossed that the PACT Act is passed, but what does this mean locally? Of course, this new bill has exceptions. The exceptions include protection for potential violators from normal veterinary care, hunting and conduct necessary to protect life or property from a serious threat caused by an animal. The local spin on these exceptions: if your dog is chasing livestock, whomever owns that livestock can shoot your dog, legally. Dogs can still be chained up and living outside day and night. Hunting includes trapping, a topic that is all too familiar in our local communities with three trapping incidents reported over the last nine days. A word within the PACT Act that has some local familiarity is the word “intentional.” Webster defines intention as a determination to act in a certain way. Intention to harm must but be proven in order for someone to be found guilty. We’ve learned that intention is an incredibly hard thing to prove in a court of law. According to a recent poll on Newsweek.com, Wyoming ranks 49 out of 50 states in terms of animal protection, but here’s the good news, if the PACT Act passes, it will be the first time in history that in Wyoming someone can be charged with animal cruelty. If the Wyoming courts toss it out due to state laws, one can still be persecuted federally.

Within the Animal Welfare world, we must celebrate the small victories. The PACT Act proves that there are people out there doing the hard-legislative work to protect animals within the law. In a day that our nation feels divided, an unanimously passed bipartisan animal cruelty law gives us a lot of hope for the future and is a significant victory for all living creatures.