Is it just us or has there been an influx of dogs going missing for extended periods of time? Check out these two success stories of missing dogs reuniting with their owners BECAUSE of community cooperation and effort!

Miss Maggie Rose went missing from her mom at the top of Snow King on September, 26th. She was spotted almost daily for the duration of her time on the loose. Little Maggie covered some MAJOR ground over the 16 days she was at large. She was spotted all over East Jackson, the Gregory Lane area, and on Snow King mountain. Jackson community members continued to call in sightings of Maggie Rose to her mom, Debbie and to the PAWS office daily. Everyone sang the same tune who saw her: she would bolt when you’d try and get close or say her name. PAWS staff went out looking for Maggie numerous times and often while out saw other people doing the same thing. Finally on the evening of Thursday, October 11th Maggie’s mom’s sports doctor, Dr. Josie (who knew Maggie was missing) was walking home on Glenwood and while on the look out for Maggie, Maggie crossed the street right in front of her and luckily into someone’s fenced in yard with the door open. Dr. Josie knew the homeowner who luckily was outside and yelled for her to shut the yard door and BOOM Maggie Rose was contained! The two women fed Maggie some food to keep her content, called her mom, Debbie, and alas the duo were reunited after 16 days separated.

Trissta and Maggie a few moments after Maggie ran into her yard. 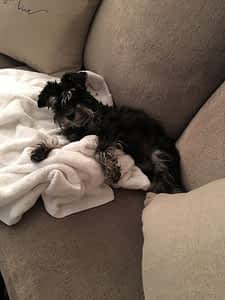 Maggie’s first night home. Down 2lbs, exhausted, and happy to be home.

Maggie 5 days after being found. Groomed and 1lb heavier.

You may know long time Jackson resident and the Senior Center Bus Driver, Kathy. Kathy’s 10 year old rescue Red Heeler, Chase, escaped from the back of her truck in town on the morning of September, 25th. He too was seen many times all over town sticking to the North Glenwood and Stage Coach Motel area. Kathy received many calls from locals who were out and about and would see him, but Chase was in constant motion and never stopped running. On Sunday, October 14th a local couple were enjoying their last float of the season down the Snake River when they spotted Chase along side the river close to the Hoback Junction area! Chase didn’t run but continued to bark his head off asking for help in his own way. The couple pulled their boat over and Chase allowed them to get close enough to check his tag. They leashed him up, called Kathy, and walked him up to the road. Kathy and Chase were reunited after 19 nights! Chase is currently recovering from his time out on his own beautifully. He has a bit of a stomach bug, but other than that he’s back to his regular Chase self.

Jackson Hole community you are amazing! Because of your awareness for lost dogs, many days of looking, reporting of sightings, and quick actions, these pets are back with their people! Thank you to everyone who aided in reuniting these families!